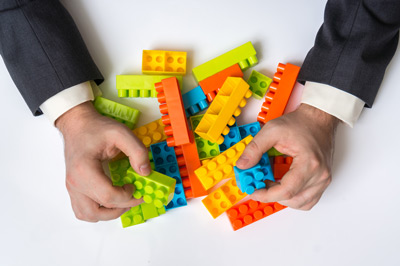 At the end of January, the Danish toy manufacturer Lego achieved an important stage victory in its fight against unfair competitors. The Guangzhou Intellectual Property Court prohibited a Chinese company from selling toys heavily based on Lego sets.

The ECJ did rule that the design of the bricks is no longer protected. However, copying the company’s logo and existing game series sets is prohibited. Nevertheless, Chinese companies are repeatedly imitating these building blocks and sets from one of the largest toy manufacturers in the world. The margin in trading toys just seems to be too lucrative to pass on.

For example, the company “Lepin” exclusively produces Lego bricks and uses a very similar logo (white letters on a red background in a very similar font). Lego runs a “Star Wars” series which is very popular with customers. The Chinese competitor sells practically identical building sets under the name “Star Wnrs”. However, Lepin only charges a tenth of the Lego prices on average and aggressively advertises the compatibility of its bricks with those of the Danish world market leader.

If the goods from China were not so readily available to the whole world via the internet, Lego might not even have been too interested to enforce its trademark rights in China. Although the People’s Republic is known for its theoretically extensive legal protection options, its rulings also show little effect. While one of the companies selling illegal copies is still in dispute in court, two new companies with the same business model are already being founded.

But Lego is not only forced to take legal action against imitators for reasons of deterrence. This was also necessary due to particular economic considerations. If identical products from the same series are available worldwide at significantly cheaper prices, losses will be inevitable in any line of business. This fear is even more justified if these products are compatible with your own.

Improvements in China regarding legal protection

In spite of everything, there is improvement in sight with regard to legal protection in China: Although corruption and governmental slackness in the pursuit of trademark infringements will continue to be observed, China wants to establish its membership in the World Intellectual Property Organization. The United States regularly reminds Beijing of the obligations associated with this membership to promote the rights to intangible assets.

The serious pursuit of improvement is also reflected in the constant updating of the already quite extensive Chinese trademark law. Action against counterfeiters may initially seem unpromising, but this case shows that vigorous prosecution can be successful even in China. Feel free to contact us if you need help protecting your own brand.